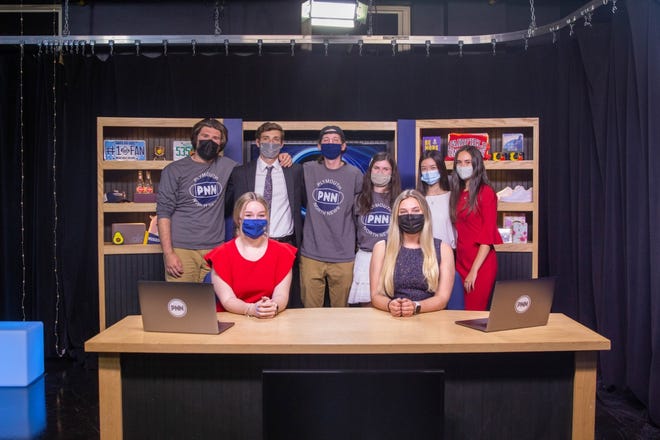 The eight-person team won the Student Emmy for Best High School Magazine Program for their first show of the year – which aired in October, as students still adjusted to a blended learning model.

The show examined the issue of fairness and justice in the school and in the community, examined a marketing student initiative to promote local buying, and explained the new COVID-19 rules surrounding autumn sports.

The team of Amber Pestana and Caroline Richards also won a Student Emmy for High School Arts and Entertainment / Cultural Affairs for their â€œSpotlight on Brooke Potvin,â€ a story about a Plymouth North senior who became a social media influencer. social media during the pandemic.

Shelley Terry teaches the broadcast news program with Evan McNamara. Terry said the pandemic posed planning challenges as members of the press team were split into two groups for most of the year.

Terry had six students two days a week and two students the other two days, but the group did not meet until after the return to in-person learning in April.

The students nevertheless rose to the challenge, with some participating in remote planning sessions.

â€œWe had some real shining stars who worked really hard,â€ said Terry, citing students Bailey Norton and Caroline Richards for their efforts on this year’s live show. Technical difficulties prevented the presenters from practicing their roles, but they were successful in the live performance.

Terry also credited Caroline Richards and Amber Pestana’s partnership during the year. â€œThey were the best partners, and that’s one of the best things you can be in this business – be a great partner and always invest 110%,â€ she said.

Terry also noted the work of Karen Phan. â€œKaren brought so many story ideas and had the passion, enthusiasm and positivity that we needed,â€ said Terry.

Although they are forced to alternate school days for much of the year, members of the press team were able to reunite last summer for a three-day training camp that will take them to the next level. presented the basics of the program. Over the course of the year, they produced six shows, which is down from the usual nine or 10, but impressive considering the odd year.