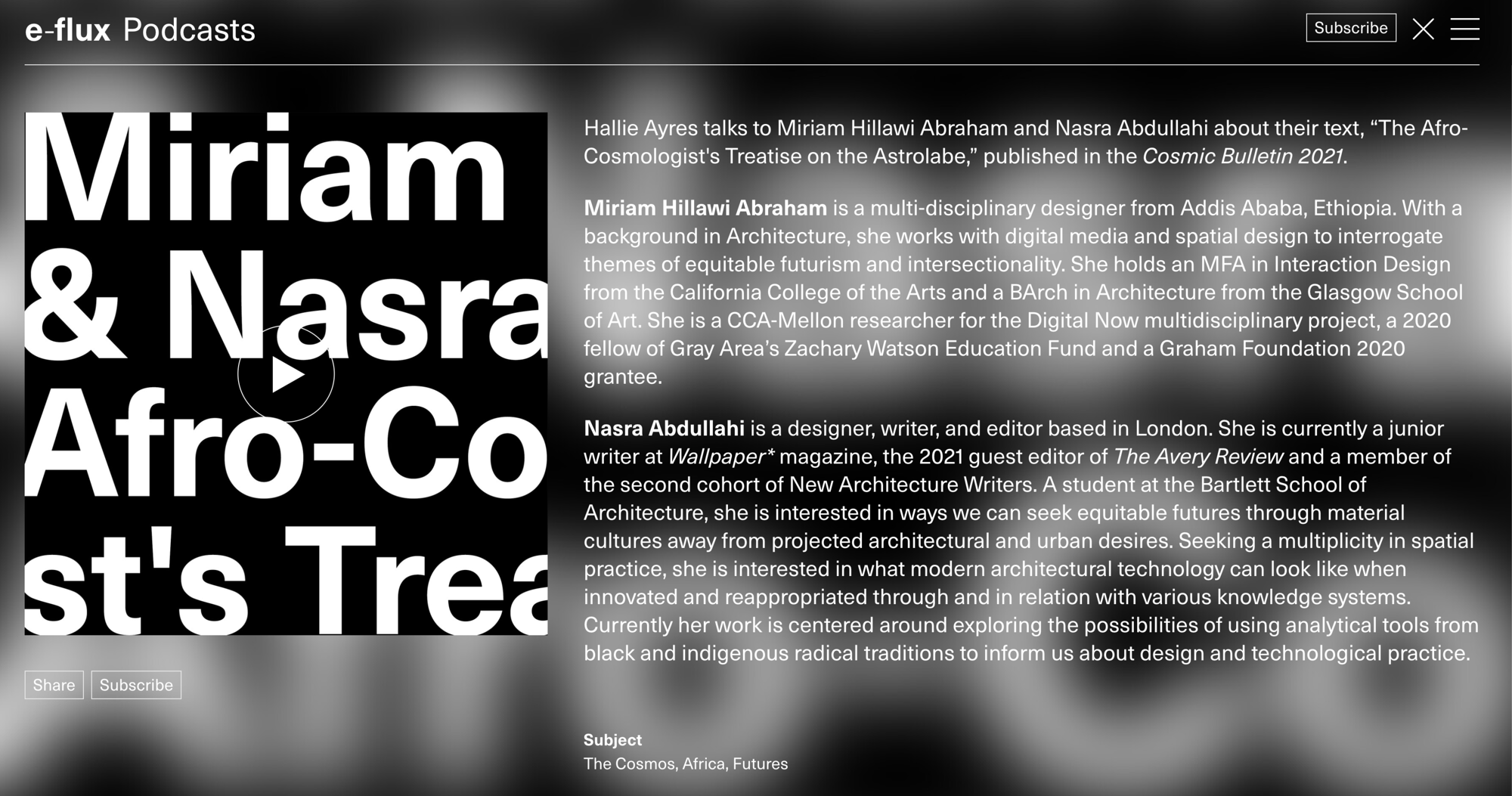 We are happy to announce new episodes of the e-flux podcast, and look forward to returning to a more regular production schedule. Read recent episodes below or sort the full archive by contributor and topic here.

Miriam Hillawi Abraham is a multidisciplinary designer from Addis Ababa, Ethiopia. With a background in architecture, she works with digital media and spatial design to interrogate themes of equitable futurism and intersectionality. Nasra Abdullahi is a London-based designer, writer and editor. Currently, her work is centered on exploring the possibilities of using analytical tools from Black and Indigenous radical traditions to inform us about design and technological practice.

Isabelle Fremeaux & Jay Jordan: We are “nature” defending itself: Entangled art, activism and autonomous zones
Andreas Petrossiants discusses We are “nature” defending itself: intertwining art, activism and autonomous zones (Pluto Press/Journal of Aesthetics and Protest, 2021) with authors Isabelle Fremeaux and Jay Jordan. An excerpt from the book was published in e-flow log number 124.

Isabelle Fremeaux is an educator and action researcher. She was previously a lecturer in media and cultural studies at Birkbeck College London. Jay Jordan is an arts activist and author, co-founder of Reclaim the Streets and the Clandestine Insurgent Clown Army.

Shimrit Lee on Decolonizing Museums
Hallie Ayres talks with Shimrit Lee about her book, Decolonize museumspublished as part of the “Decolonize That” series by Warscapes and O/R Books.

Shimrit Lee is a Philadelphia-based writer, educator, and curator. An interdisciplinary scholar working at the intersection of visual culture, performance, and critical security studies, Shimrit’s research interests focus on the cultural production of security narratives in Israel and the United States.

Wet-Togetherness series produced by the 13th Shanghai Biennial
9 sound pieces in which 21 artists, activists and researchers stage water through sound. A collaboration between e-flux and the 13th Shanghai Biennial, Bodies of Water, curated by Andrés Jaque, Marina Otero Verzier, Lucia Pietroiusti, Filipa Ramos and YOU Mi, and curated and promoted by the Power Station of Art. The series was edited by José Luis Espejo and Rubén Coll with sound design by Tomoko Sauvage, coordination by Roberto González García and locutions by Yang Yang.

Woodbine on Facing Disaster Together
Andreas Petrossiants talks to Woodbine members Matt Peterson and Laura McAdams. Woodbine is a volunteer-run experiential center in Ridgewood, Queens, to develop the practices, skills, and tools needed to develop self-reliance. Since March 2020, they have been running a food pantry in partnership with Hungry Monk that serves thousands of families a week.

“We came together from our experiences in Occupy Wall Street and Hurricane Sandy, having lived through a New York City forever changed by 9/11 and the financial crisis of 2008. Trump and Covid are just the latest from a series of disasters we have faced together, and community resilience and collective self-reliance remain our response and our horizon.In the fall of 2013, Woodbine was conceived as an organizing framework to rethink how to inhabit a city and a neighborhood together. Now is the time to begin a new chapter and a new phase, and to expand our collective capabilities. Quote from Woodbine website.

The e-flow podcast features conversations with some of the most engaged artists and thinkers working today, and is available for subscription on Apple Podcasts, Spotify, Google Podcasts and SoundCloud.